A locomotive and cars used on Dunedin’s Taieri Gorge Railway left the southern town this morning for the North Island.

The engine and rolling stock had been leased by the Municipality of Dunedin Railways, but they are no longer in use as the line was put on hold with the loss of 50 jobs.

Some of those workers joined a group of two dozen supporters to see the locomotive take off this morning.

Among them was Judy Trevathan, who had worked for the company for 16 years.

“It’s actually quite sad to see our train go by and there is now a lot of knowledge and skills that just disappear,” said Trevathan.

“We are a small collective – like a family unit.”

She was still hopeful that the company would resume its excursions in the future.

“We just wish and hope that we will work together again.” 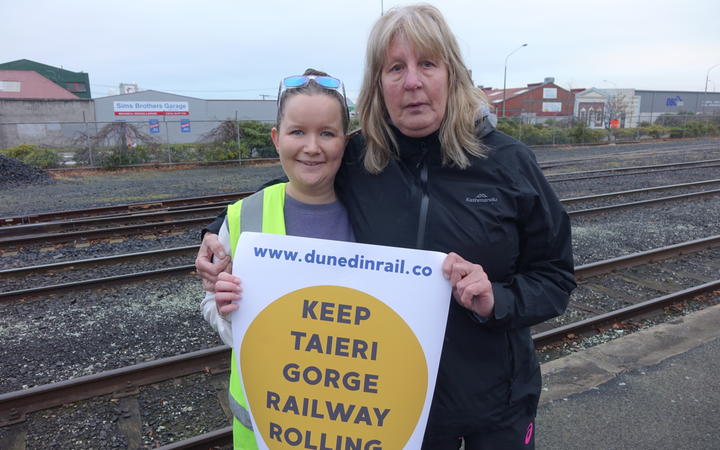 Dunedin Railways employees Courtney Kilner (left) and Judy Trevathan will be among those who lose their jobs next week.
Photo: RNZ

“The people they leave in charge once we get into the mothballs are great,” Kilner said.

“There is a lot of hope that we will come back. The train that left today, we use it to mean the last train, but I hope that is not the case. The cars leaving have been leased by the company … but everything else, we still own them and as far as I know there is no intention to sell them. They will try to keep them oiled and moving. “

She recently visited Queenstown and saw what the return of local tourists had meant for this center.

“It’s just busy as usual, everything is working. Everyone has been released, we can do things again and I don’t see why we couldn’t be one of those things that everyone comes to do.” , she said.

The couple were grateful for the support from the community.

Keep Dunedin Rail Rolling spokesperson Dave Kearns said the support made it so difficult to swallow the putting on hold of Dunedin Railways assets.

“We certainly have their [Dunedin City Council’s] support in principle. The way the company is incorporated through the DCHL [Dunedin City Holdings Limited] they are unable to get the Dunedin Railways board of directors to change their plans.

“It’s a bit of a bizarre situation when with the public support, the owner’s support in the form of the DCC, the political support even down to the central government, there are only two individuals who are determined to shut down this thing and at this time we are unable to change our mind. “

Today has been a sad day for the railway workers in Dunedin, Kearns said.

“Despite the fact that there are no revenue passengers on board, this may be the last passenger train people see operated by Dunedin Railways.

“It’s a pretty dark moment to see this. And it’s indicative of their plans and the more we hear the story of this shelving, the more we think the financial mismanagement that preceded it is the real reason. of the effective shutdown of the business rather than the Covid lockdown. “

Workers with the support of the Rail and Maritime Transport Union intended to fight against any closure of the Dunedin railways and were still pushing for the 51 workers to stay in their jobs before the operation was officially put into effect. night light on June 30, he said.

“Otago’s future includes rail, especially at this time when we need a boosted economy, it’s a green solution and people should be looking to keep their jobs,” she said.

“It’s a really sad day for these people who are losing their jobs … and I hope the council can get their ownership back. These people who have been elected to make decisions should do their part and make the right decisions. . “

The council has agreed to cover up to $ 1.05 million of the ongoing costs of putting the Dunedin Railways on hold starting next week.

The costs included retaining a small number of employees, as well as the storage and maintenance of key assets such as locomotives, cars and vans.