60 years ago, a letter from a reader in a national railway magazine sparked a series of events that led to the opening of the Didcot Railway Center.

Jon Barlow wrote to Railway Magazine saying he was considering launching a campaign to buy a British Railways steam tank engine and keep it in working order.

It was 1961 and plans were underway to phase out steam locomotives in Britain and replace them with diesels.

Now, in an article in the September issue, writer Chris Milner recalls the history of the company and the role The Railway Magazine played in it.

It was in Taunton, Somerset at the time and the new owners needed a place to keep it. They chose a disused cattle dock siding at the Totnes wharf.

By April 1966 the company had four locomotives, including No. 6998 Burton Agnes Hall, a formerly Oxford-based locomotive that had rolled on the last day of steam over the Western Region three months earlier.

Another locomotive acquired by the company was Tank Engine # 6106 in a stable at Taplow, Buckinghamshire.

The company’s arrival at Didcot came after two UK Rail officials on a train spotted No 6106 and one said: “I thought we all put discarded. ” 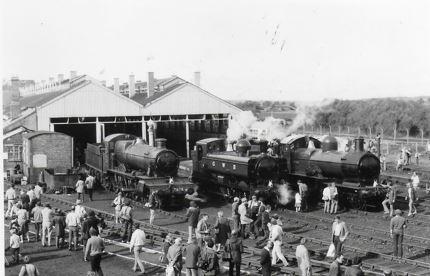 Railway officials have opened discussions with the company to make the steam engines less visible on the network.

After all, diesel was the future – and the result was an agreement to share the Didcot locomotive shed with British Railways.

Initially, the company was allowed to use one of the four “roads” of the hangar and hold one members day and one open house per year.

But when British Railways finally pulled out in 1970, the company took over the entire site and began its expansion which has continued to this day.

Mr. Milner writes: “With an authentic four-lane steam shed dating from the 1930s, a 70,000 gallon water tower, a coal stage, a lifting shop and a pit ready for a turntable, there is had a lot of possibilities to create a functional museum. . ”

The center, which now covers 25 acres, is one of Oxfordshire’s most popular tourist attractions and it, its staff and volunteers have won numerous awards.

Many visitors are expected to attend the centre’s 60th anniversary gala on October 23-24, as the historic locomotives are on steam.

Mr. Milner concludes his article: “What has been accomplished by the members of the Great Western Society over the past 60 years is simply remarkable.

“If it hadn’t been for this letter in The Railway Magazine asking for money to save a tank locomotive, this comprehensive collection of GWS locomotives might never have seen the light of day.”

For more information on events at the railway center, visit didcotrailwaycentre.org.uk.